The Nuvo H20 is an innovative, salt-free water softening system that can be used for the entire home.

The Nuvo H20 Home Water Softener System is best suited for homes fewer than 1,500 square feet, while the Manor DPHB Water Softener is best suited for homes in excess of 1,500 square feet. In this review, we deep dive into both versions of the Nuvo H20 home water softening system to determine their standout features, pros, and cons! 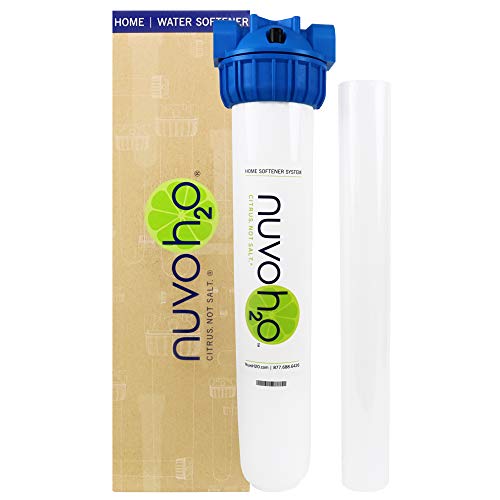 Overview of the Nuvo H20

As a company, Nuvo H20 has been developing water-softening technology for more than three decades. Its secret is the use of citrus — as opposed to the more commonly used salt — to remove the negative components of hard water while retaining the beneficial minerals that ensure water tastes and feels better and is overall healthier.

This patented technology, called CitraCharge, depends upon molecules to keep the destructive hard minerals (such as magnesium and calcium) from sticking to pipes, appliances, fixtures, and surfaces. It simultaneously removes existing scale build-up, so most homeowners who begin using the Nuvo H20 soon notice a decrease in the limescale that often appears on faucets and appliances.

The NuvoH20 is not just a water softener, but a water conditioner. According to the company, this water softening system will produce water that lathers better and feels less slimy than standard, untreated water. The system is capable of solving many of the most common hard water problems in households.

The Nuvo H20 is environmentally friendly, too. While many of its competitors produce some wastewater, the eco-friendly Nuvo H20 cleans every ounce of water that runs through it. This means that the water that ends up back with Mother Nature is just as healthy as the water that comes out of your faucets.

In fact, many Nuvo H20 users report that their indoor and outdoor plants have thrived when watered with water softened by the Nuvo H20. This is likely because the system very effectively balances water’s pH levels.

The following are the standout features of the Nuvo H20:

1. Salt-free cartridge: Unlike the majority of its competitors, the Nuvo H20 water conditioner does not use salt. Its salt-free cartridge also does not add salt to your water, so the result is water that doesn’t feel slimy or filmy. Additionally, the treated water lathers better and reduces dryness in skin and hair.

3. Compact design: The Nuvo H20’s compact design means that it can be installed just about anywhere. This sets it apart from many of its larger competitors.

4. Lifetime warranty: The nuvoH20 company is so certain that its product is dependable long-term, it offers a free lifetime warranty. This warranty is even transferable with the sale of your home. In the unlikely event something does go wrong during the system’s lifespan, NuvoH20 assures customers that they can have their system repaired or exchanged at no additional cost.

Performance of the Nuvo H20

Unlike most water softening systems, the Nuvo H20 does not soften water using salt. Rather, it uses citrus! So just how does the Nuvo H20 work? There are two main factors that make the Nuvo H20 not only work but work effectively and efficiently. First, the Nuvo H20 uses citric acid to reduce the measured pH level of the water and eliminates scale formation.

Secondly, the Nuvo H20 system uses a process called chelation to isolate magnesium, calcium, and other hard mineral ions that are naturally present in most water. The isolated minerals then bind to CitraCharge, the Nuvo H20’s patented chelating agent, and become incapable of forming scale. This chelating process is significant because the Nuvo H20 softening system is one of the only softening systems to use it. The process is approved by the FDA and considered completely safe.

The Nuvo H20 does not need to regenerate. This means you will never be left waiting for water. Nor will the flow rate of your water be negatively affected. The Nuvo H20 company has a great video illustrating exactly how its one-of-a-kind technology works to protect your home. In order to ensure the desired results, the Nuvo H20 company employed a third-party research group called the Battelle Group to conduct extensive tests.

The results showed that the Nuvo H20 performs overwhelmingly well and effectively. Specifically, the Battelle Group was able to conclude that the Nuvo H20 system prevents the formation of scale and restores efficiency in water heaters that had been previously untreated — something nearly every other system cannot do. Should those who purchase the Nuvo H20 not be satisfied initially with its performance, the Nuvo H20 company does offer a 90-day money-back guarantee.

Installation & Maintenance of the Nuvo H20

The Nuvo H20 water softening system is much easier to install than many of its whole-house competitors. This is partly due to the intuitive nature of the CitraCharge technology, and partly due to the system’s compact design. Its small size means it can be installed right on the main cold water line, without taking up any floor space. It requires no drain, calibration, or electronics to work efficiently.

Everything needed to install the Nuvo H20 is included in the box:

The Nuvo H20 company does suggest buyers hire a professional plumber to install their new Nuvo H20 water softening system. While the system’s simple design makes installation relatively simple, it also requires the tools and expertise necessary for cutting into the main water line of a home or building. For the buyer’s convenience, the Nuvo H20 company does have connections with hundreds of experienced technicians throughout North America.

Anyone can find a Nuvo H20-affiliated technician by searching the Installer Locator section of the Nuvo H20 website. Installation by a professional typically takes about one hour. Those with the skill and desire to install the Nuvo H20 themselves can certainly do so. Detailed instructions are included in the box, and can also be found on the Nuvo H20’s official website. An in-depth installation video is also available.

A question that is commonly asked of the Nuvo H20 is whether or not it can be installed on the exterior of the home. The answer to this is yes, it can. However, it is important that any softening system installed on a building’s exterior be safe from both direct sunlight and below-freezing temperatures.

The most difficult part of maintaining the Nuvo H20 is paying enough attention as to when the cartridge is depleted. This usually occurs every 4-6 months or approximately every 20,000 gallons of water, and simply requires purchasing a new cartridge. Installing a new cartridge is something any homeowner can do with ease and in about five minutes.

The steps to replacing a cartridge include turning off the water supply to the Nuvo H20 unit, unscrewing the top of the unit, removing the used cartridge, and placing the new cartridge in its spot.  Employing this salt-free water softener is certainly more convenient than the traditional water softener. Its use negates the need for buying and lifting those heavy bags of salt every month.

Which Nuvo H20 Water Softener is Right for Me?

There are currently two Nuvo H20 water softening systems on the market. Both use the same innovative technology at the same level of success but are capable of different capacities. The model that is best suited for your home depends on the size of your house, as well as the number of people.

The Nuvo H20 Home Water Softener System is ideal for homes that are less than 1,500 square feet, and which have two or three residents. Its flow rate is 15 gallons per minute (gpm), which is faster than the standard. The system itself weighs just eight pounds and measures approximately 24 inches in length and five inches around.

The Nuvo H20 Manor Water Softener is designed for homes that are larger than 1,500 square feet. As expected, the manor system is larger than the home system. It measures about 29 inches in length and 10.5 inches around. It weighs just over 20 pounds and is still compact enough to fit just about anywhere.

What are the Benefits of Using a Saltless Water Softener?

Though most water softeners use salt, these traditional systems have a number of inherent cons. For starters, they require approximately 50 pounds of salt each month. Not only can this weight be burdensome, but it is also an ongoing expense. Traditional water softeners also require electricity, take up a lot of space, are difficult to install, and must be installed near a drain, and wastewater due to their backwashing systems.

Alternatively, saltless water softeners are often referred to as water conditioners. The benefits of using a salt-free system are many, and include:

There are also some less obvious benefits to using a water softener that does not employ salt. For example, saltless systems do not add sodium back into the water. This is good for household members who are trying to limit their sodium intake and/or who have cardiovascular issues. While most salt-based water softeners produce water that feels filmy or “icky,” saltless water systems do not.

1. How often should you replace the cartridge?

The Nuvo H20’s cartridge should be replaced every 20,000 gallons. For most households, this will be every 4-6 months. To make staying on top of this important maintenance easier, the Nuvo H20 company offers an auto-ship program. Subscribing to this program results in the company shipping a new cartridge to your home every few months.

2. How much do Nuvo H20 replacement cartridges cost?

Not officially. While no water softener, including the Nuvo H20, is designed to improve a household’s water pressure, the Nuvo H20 does get rid of limescale and other hard minerals which may be reducing water flow.

No, the Nuvo H20 does not remove iron. A filter system would be best for a household that needs iron removed from its water.

No. While the Nuvo H20 water softening system works very well with typical municipal water, it is not designed to sufficiently handle sediment-filled well water. Here is a great resource for the best water softeners that can be used for well water.

6. How quickly does the Nuvo H20 start working?

No. The purpose of the Nuvo H20 is to soften water. Therefore it only solves the issue of water hardness. If your aim is to remove contaminants, then you will need a whole-house water filtration system.

Not necessarily. The Nuvo H20’s main job is to soften water by removing hard minerals. Most odors in water can be removed with a filter or filtration system, which the nuvoh20 is not.

9. Does Nuvo H20 work without installation?

10. Does the Nuvo H20 require electricity?

Though it is recommended that a professional install the Nuvo H20, its maintenance is something any household member can easily accomplish. Once installed, the Nuvo H20 softening system uses citrus and its patented CitraCharge technology to soften water and rid pipes, faucets, and appliances of salty crusts. The result is cleaner water that is both fresher and healthier.