Water Conditioner vs Water Softener- Which One Is Better?

If you find yourself having to decide between these two, it probably means you are facing a hard water problem and looking for a water treatment system. They are both very effective water treatment methods that have been used for generations to improve the quality of water.

What sets them apart from each other are the methods and underlying procedures applied to water treatment. These processes require different resources and the end product is also different for each. It is these differences between a water softener vs conditioner that will determine which water treatment method is better for your needs.

How Does a Water Softener Work?

It removes excesses of minerals such as calcium, magnesium, and silica ions from water through a process called ion exchange.

This is a water softener’s main compartment through which the hard water passes and is subjected to the ion exchange process. It has a resin bed, which is a collection of thousands of tiny resin beads with a negative electric charge, coated with positively charged sodium or potassium ions.

As the water supply enters the mineral tank, the mineral ions are attracted to the resin beads. They break their bond with water molecules and attach themselves to the beads, displacing the sodium or potassium ions. This happens because the positive charge in the hard water minerals (silica, magnesium, and calcium) is greater than the one in sodium or potassium and has a stronger attraction to the negative charge in the resin beads.

The displaced ions have to bond to the water molecules, replacing the minerals to maintain the charge balance. Therefore, the water that will flow out of the mineral tank will have dissolved sodium chloride or potassium chloride, better known as salt.

These soluble ions are softer and more benign than the insoluble silica, magnesium, and calcium ions left in the resin beds. They will easily flow out of the mineral tank with the now soft water, completing the ion exchange process.

This is why softened water usually has some amount of sodium or potassium. They are water softening byproducts.

A great water softener will ensure the hard water comes into contact with as many resin beads as possible to evenly distribute the ion exchange process. This makes it more efficient as it is operating at full capacity while reducing wastage.

This is an easygoing self-regenerating water softener that you can use anywhere you park your RV. It is the point of entry protection for your RV plumbing system. It has a built-in drain line flow restrictor which ensures you maximize its resins.

It is easy to install and compatible with most water outlets.

Eventually, the resin will be burdened by the mineral content and will no longer have the capacity to effectively remove the ions from hard water. At this point, the resin bed has to be regenerated.

This critical compartment stores a concentrated solution of dissolved salt or potassium called the brine solution. This solution is used for flushing the mineral tank and recharging the resin bed. It should be periodically replenished with salt or potassium blocks or pellets to keep it charged.

The solution is run through the resin bed every time the controller in the mineral tank ignites a regeneration cycle. It rinses the hard water minerals off the resin beds while charging each bead with a sodium or potassium ion, rejuvenating its power.

Morton’s Water Softener Pellets are products from one of the established water softener brands. They are made in the United States and are compatible with Morton water softeners. They have a high purity rate which maintains a longer regeneration cycle. 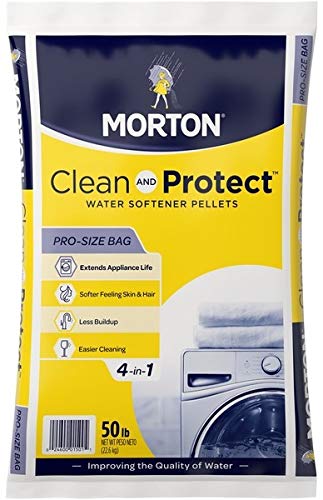 How Does a Water Conditioner Work?

It uses catalytic reactions to alter how minerals and biological contaminants will behave in water to prevent scale build-up and biofouling of the water system. Different types of water conditioners use different methods to achieve this.

These remove contaminants through a process known as adsorption, where contaminants bond with or stick to the carbon surface like it is made of Velcro.

Carbon is very porous and can therefore hold a lot of contaminants. It is activated using steam or heat, which further opens up the pores, increasing its surface area and giving it the capacity to hold more contaminants. The more the water stays in contact with the carbon surface, the more efficient the filtration.

They improve water quality by removing organic compounds like chlorine, Sulphur, and mercury, chemical compounds like trihalomethanes, pesticides, and herbicides. They also absorb the residual bad taste and odor from water treatment.

They are, however, unable to manage water hardness because they can’t stop dissolved minerals. Calcium, magnesium, and silica are chief perpetrators of limescale build-up that will sail right through them.

These employ electric and magnetic impulses to cause agitation in the water which influences the particles as it flows by so that they cannot bond. This reduces the concentration of calcium and magnesium, ensuring they don’t accumulate and form limescale.

They are the most efficient class of water conditioners, and we shall focus our attention on them.

They use a process called template-assisted crystallization (TAC).

As more magnesium, calcium, and silica ions get caught in the nucleation sites, the crystals keep growing. At some point, they will break off the TAC medium and are released back into the water.

The released crystals are stable, and the minerals will not break off to form limescale as the water flows through your plumbing system. The crystals are microscopic and will easily flow through the water. They do not require a regeneration cycle.

By crystallizing the silica, calcium, and magnesium minerals found in hard water, they can retain them while ensuring they don’t build up on surfaces. This physical alteration disables them from forming limescale.

These conditioners can also tackle biological contaminants such as bacteria and algae that build up on surfaces, creating a biofilm that is equally obstructive as scaling with added health risks.

This prevents the minerals from precipitating (becoming solid), building up, and scaling the surfaces of your water heaters and plumbing fixtures like pipes, showerheads, and faucets. The same applies to your hot water-using appliances like kettles, dishwashers, and laundry machines.

It maintains a high water flow rate of roughly 10 gallons per minute. The disposable cartridges are easy to install and replace, even for a novice.

Hard water is rich in minerals such as silica, calcium, and magnesium, which are often responsible for limescale build-up that causes a lot of damages to our plumbing system and home appliances. The goal of softening and conditioning is to manage these minerals and prevent any form of scaling.

Scale build-up promotes corrosion and clogs your pipes, resulting in loss of pressure and reduced water flow rates. It makes your appliances unsightly and interferes with their functionality after accumulating in their pipes and valves. This increases your repair costs while reducing their life cycle.

Water softeners offer a more permanent solution to these hard water problems compared to conditioners because they rid the water of all hardness. Conditioners, on the other hand, don’t actually get rid of the minerals but try to manipulate how they behave so that they don’t form limescale.

They may protect your plumbing and home appliances, but some hard water problems will persist because the hard water minerals are still there. Soap will still take long to lather; the brittle nails, dry hair, and skin that come with hard water showers will also prevail.

Salt-based water softeners undergo periodic regeneration cycles to replenish the resin beads with sodium ions. You need to keep adding salt in the brine tank to keep the system charged.

Resin beads can serve an average of 7 to 10 years before they need to be replaced. They get fouled with iron and manganese or organic substances like tannin and humic acid

Iron and manganese fouling is not easy to detect because the resin mostly comes in dull colors, black or amber.

You may need to install a water filtration system that removes problematic contaminants such as iron and chlorine before they get to your water softener tank to make them last longer.

Another option is to clean the resin separately or add resin cleaner to the brine solution. Alternatively, use a salt that is formulated with resin cleaner. They prevent the build-up of iron in the water softener and remove any iron that might have accumulated on the resin during regeneration.

Water conditioners, on the other hand, are more hands-free and do not need much maintenance beyond the replacement of cartridges when due.

The byproduct of this is brine-heavy wastewater which is flushed into the city drain lines. Not environmentally friendly and is unhealthy for humans and other animals surviving in the ecosystem. A substantial amount of water is also wasted during this regeneration.

Several states in the US actually have partial bans on water softeners because of this.

Water softeners are not equipped to handle biofilm. Their sole focus is softening hard water by ridding it of the hardening chemicals. This leaves an opening for the accumulation of bacteria and algae in your plumbing system, a health risk.

Water conditioners can remove most organic contaminants, including such pathogens, which makes them safer for water that is to be ingested.

Some of the minerals that are removed by water softeners are actually beneficial to human beings. Calcium, for instance, is good for the bones and teeth. Water conditioners retain them in the water post-treatment.

The addition of salt to the water supply makes it unsuitable for people with heart complications or low sodium diets.

The extra salt in softened water can leach heavy metals from pipes, valves, and faucets in your building, exposing you to toxins that will build up over time and can be detrimental to your health.

Advantages of a Water Conditioner Over a Water Softener

Advantages of a Water Softener Over a Water Conditioner Water softeners produce more suitable water for washing, while water conditioners are more inclined towards making the water safe for ingestion. This is not to say that your laundry experience will be terrible if you are using water that has been treated using a water conditioner. Many households also survive on drinking water from water softeners without adverse health effects.

It has a lot to do with the initial state of the water and what kind of treatment is needed in the first place. You should also take time to fully comprehend your priorities and your water usage patterns to establish the solution that will better accommodate your needs.